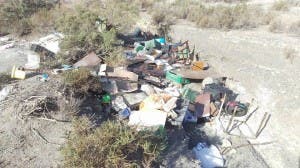 A BRITISH expat has launched a project to clean up the ‘layer of filth’ on Almeria’s Tabernas desert.

Julian Phillips, 46, from Essex, says the region has become increasingly popular for tourists and filmmakers but its future is being undermined by an increase in fly-tipping and littering.

“All the beauty is being hidden beneath a layer of filth,” he told the Olive Press, “from household refuse and rubble to unwanted electrical goods and dead animals in plastic bags.”

Phillips is hoping to raise awareness and get more local support for the campaign. 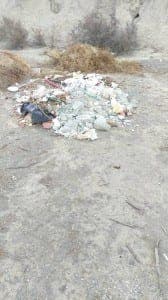 “It’s frustrating to see the lack of respect for nature shown by the locals,” he added, “and there has been a lack of action from the Town Hall too, who have not replied to any of my messages.”

Phillips has created a Facebook page and arranged the first volunteer-led clean up for October 16.

Volunteers will meet in the car park of the sports centre in Tabernas at 10am.

“We are looking for anyone who is willing to help out, if they have tools, a 4×4 or van, a trailer all the better,” said Phillips.