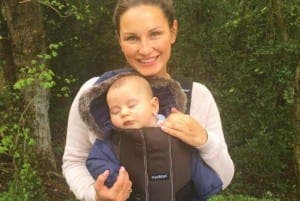 Probably preparing her boy Paul for the many family trips to ‘Marbs’, the 25-year-old Essex lass said she wanted him to learn the language because of her connection to Spain.

She lived in Marbella from a young age and was fluent as a toddler.

The original TOWIE cast member made the comments during her new reality show The Mummy Diaries, but some viewers blasted the lessons as ‘ridiculous’.

Others supported the move, agreeing with experts who have since said that it’s never too early to begin teaching children another language.

Language school Bilinguasing said: “Decades of research suggest that introducing babies to a second language before they are six months helps to shape the brain at its most flexible stage.”

Anthony Piovesan - 1 Feb, 2023 @ 18:00
The Olive Press takes a look at the abandoned site where missing teenager Amy Fitzpatrick could be buried. The old Hippodromo racecourse in Mijas used...