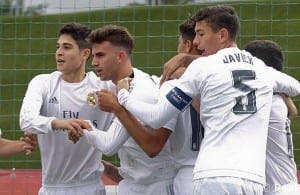 THE Spanish FA has been slapped with a hefty fine by FIFA for failing to enforce rules on underaged players.

Barcelona, Real Madrid and Atletico Madrid have all been sanctioned by the world footballing body in recent years for illegally signing foreign players under 18.

The Spanish football federation has until the end of the month to appeal a €250,000 fine in the latest battle with FIFA over under-age transfers.

As well as the fine, the Spanish FA has been told it had six months to clean up its act or face more punishment.

The latest sanctions relate to cases involving teenagers who were signed for Atletico and Real Madrid between 2005 and 2014.

Both clubs are currently serving one year transfer bans after breaking international regulations.

The Court of Arbitration for Sport is set to hear both cases later this year.