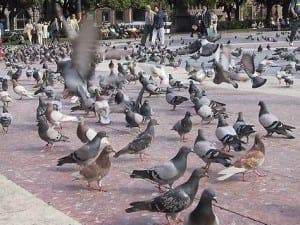 PIGEONS are being put on the pill to reduce the number of young flyers in Spanish skies.

Officials in Barcelona are testing a contraceptive pill to prevent the 85,000-strong population of city pigeons from expanding.

The ‘bird control’ pill was thought up after an initial proposal to cull the birds by shooting them was gunned down by animal activist protests.

The contraceptive will be distributed via 40 pill-dispensing bird feeders installed throughout the city.

The pill will be rolled out around other cities affected by ‘too many’ birds if it proves successful in Barcelona.