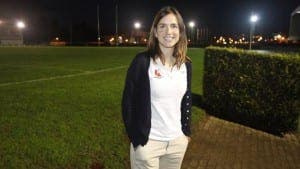 A WOMAN from Granada has been crowned the ‘Best Rugby Referee in the World’.

Alhambra Nievas is the first woman to win the award, handed out by the IRFU (International Rugby Football Union) at a ceremony in London.

The 33-year-old was shortlisted for the prize last year but has gone one better this year, beating both male and female competitors.

“I am proud to be the first woman to win this award,” Nievas said.”The passion I have for the sport has taken me here.”

A spokesman for the IRFU said the professionalism shown by Nievas is ‘revolutionizing’ women’s rugby.

“Never before has a woman been the number one referee in the world and the role of Alhambra Nievas is revolutionizing the sport of the oval ball,” he said. “The prize also serves to open doors and women can whistle at the highest level.”