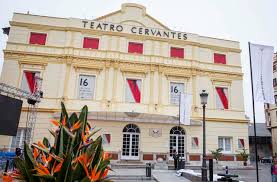 MALAGA is the stage for a major theatre festival this month.

Cutting edge and successful new Spanish language plays are now being performed throughout the city as part of the El Festival de Teatro de Malaga.

A total of 48 works for adults and children alike are to be performed in a range of theatres and alternative public spaces until February 12.

The stage spectacular has been put together by Teatro Cervantes  and will feature plays ranging from comedies and tragedies to musicals.

Tickets can be bought online at www.teatrocervantes.com