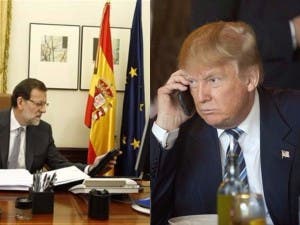 Mariano Rajoy made the commitment in an official telephone conversation last night, the first between the two parties since Trump came to power.

He also pledged to do the same for North Africa and the Middle East, according to a press release by La Mancloa.

In the 15 minute conversation, Rajoy claimed his country was in the ‘best condition’ to take on the role of ‘interlocutor’ due to its ‘stable government and an economy that is growing by more than 3%.’

He was also said to be willing to ‘develop a good relationship with the new United States administration’,  while Trump was reported to have asserted the ‘closeness and affection of the Americans towards the Spanish people.’

For his part, President Trump told Spain’s leader he was committed to NATO, according to the White House.

Its statement summarizing the call added that Trump ’emphasized the importance of all NATO allies sharing the burden of defense spending.’

The two leaders also pondered the future of the EU, with Rajoy insisting he would work hard to foster greater integration between EU states following Brexit.

Security and defence were also on the agenda, due to the countries’ joint control of the two Spanish military bases in Rota and Moron.

Both parties were said to have agreed to continue collaborating in the areas, especially in the fight against Daesh.

How Spain’s Valencia region became the leader in organic farming

ANALYSIS: Does Spain have a drinking problem?