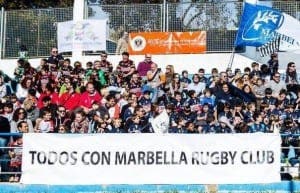 HUNDREDS have come out to support Trocadero Marbella Rugby Club amid a tax dispute which may force it to fold.

There was a party atmosphere at the home match against Almeria earlier this month as swarms of fans watched Marbella win 31-21.

It came after the much-loved club had its bank account frozen due to a disputed property tax debt.

The uncertain future led the club to make the game free to attend so that fans could show their support.

Supporters donated via collection tins, and through buying merchandise and drinks in the clubhouse.

Fans held up signs stating ‘we are with Marbella Rugby Club’ and waved the club’s flags.
As well as its first team, the club has over 250 youngsters of all nationalities training every weekend.

Rugby clubs across the country have voiced their support, as well as international kit supplier Canterbury.

Marbella’s water polo and basketball team, who have also faced difficulties due to the lack of facilities in Marbella, also voiced their support.