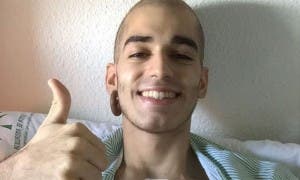 MORE than 160,000 people have signed a petition on Change.org asking for a street in Marbella to be named after the brave cancer sufferer Pablo Ráez.

Francisco José Molina, who created the petition in response to Raez’s inspirational campaign to increase awareness and the number of bone marrow donations, delivered the signatures to Marbella mayor José Bernal.

Ráez sadly lost his battle to leukaemia in February, but not before launching a campaign that went viral, its aim being to increase Spain’s bone marrow donors from 230,000 to one million.

Bernal said: “These signatures will be added to those that have been collected to try to thank Pablo Ráez for everything he did to promote bone marrow donations to save lives, achieving a significant increase of them.”

If not a street it will be a square; we are going to look for a significant place to pay homage, that we will agree with his family.”

A separate petition has been launched by Luis Ortiz Luquero for the Ráez to win an Asturias de la Concordia award.