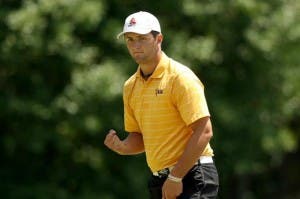 YOUNG Spanish golfer Jon Rahm could be playing at the next Ryder Cup.

The 22-year-old has become eligible to earn Ryder Cup points when qualifying begins on August 31.

It comes after he joined the European Tour as an affiliate member following his first PGA Tour title in the Farmers Insurance Open in January.

Rahm, from Barrika in the Basque country, was the world’s top ranked amateur while studying at Arizona state university, and has now soared to 38th in the world rankings.

“I have obviously taken a different approach to tour life than a lot of other Europeans who went to college in the States, but I thought this was my best shot.

“I’m surprised I have been able to take this opportunity so early but it’s great to be able to join.”

Assuming Rahm will stay within the top 50, he will be allowed to compete in the first five events of the newly-launched Rolex Series that begins in May with the BMW PGA Championships.

Rahm now has a serious chance of being part of the European team at the next Ryder Cup, which will be held at Le Golf National in Paris.