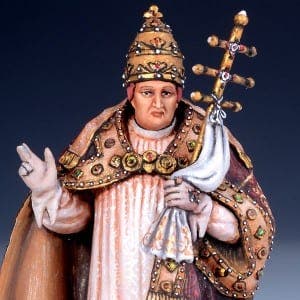 POPE Alexander VI was nothing if not colourful.

He publicly and proudly proclaimed he had a bevy of children throughout Spain and Vatican Rome, never hiding the fact that he had multiple wives (read: polygamy), mistresses and consorts.

Born Rodrigo Borgia (1431) in Valencia, he named himself Pope Alexander after Alexander the Great.

His coronation took place at a time when, as described by Vatican historians, ‘Rome swarmed with Spanish adventurers, assassins, exiled Jews, spies and prostitutes’.

Alexander was ‘magnetically handsome with a baleful reputation who had given his soul to the great demon in hell.’

But he lived in an extraordinary era. He reigned over the Vatican during The Renaissance. He personally rubbed elbows with Leonardo da Vinci, Raphael and Michelangelo. He was a contemporary of the political theorist Niccolo Machiavelli who respected Alexander as a capable and cautious diplomat.

This was also the Age of Discovery, so he also consorted with the likes of Columbus, Magellan et al. What possible connection could there be between this enigmatic Spanish Pope and today’s discussions of climate change?

The answer requires a bit of a sense of humour … although it would be a stretch to find any humour or irony in today’s serious debates about climate change.

In an effort to keep the southern polar region of Antarctica as an environmental laboratory, 53 nations have signed agreements.

Their goal is to maintain the continent as a global science preserve and to ensure no nation makes a ‘territorial claim’.

The countries of Chile and Argentina have objected – citing a 500-year-old decree by none other than Pope Alexander.

In 1494 he issued an edict (Treaty of Tordesillas) meant to diplomatically divide the newly-discovered lands of Spain (Columbus) and Portugal (Magellan).

With the stroke of his pen, he established an imaginary line running north-south (roughly longitude 46 west) from ‘Pole-to Pole’, giving lands to the east to Portugal and those to the west to Spain.

Chile and Argentina have claimed legal rights that go back 500 years to a time when they were part of the Spanish Empire.

To buttress their claim of sovereignty over the Antarctic, both countries have engaged in a series of territorial tiffs that at times, verge on the comical.

In one 1978 tactic, Argentina airlifted a seven-months pregnant woman to Antarctica and, two months later, Emilio Palma became the first person ever born on the frozen continent.

Not to be outdone, Chile subsequently sent married couples south in order to claim sovereignty, with ‘citizens’ being conceived and later born in the territory. More than a dozen births have since been registered.

The very next year, Argentina issued a commemorative stamp of young children (rumored to be Baby Emilio) gazing at a map of the Antarctic with the slogan: ‘Argentines, we must march to our frontiers’.

Chile, to demonstrate the seriousness of their claim, has made it illegal to publish a map of the country that does not include their Antarctic territory. Both Argentina and Chile have even designed special flags for their respective Antarctic regions.

Reportedly, the two countries often play a cat-and-mouse game of stealing flags and displaying their own version.

Geographically, both countries assert that the continent of Antarctica is a continuation of the Andes Mountains – a border they both share. Currently, the issue of Chile and Argentina’s territorial claims remains unresolved within The Antarctic Treaty System.

Scientific discoveries from the polar regions are often key to understanding global climate. Since most of the world’s snow and ice are in the polar regions, these areas are expected to be the first and most-affected by global warming.

Ergo, warming in the polar regions greatly influences the climate in other latitudes. The wisdom of having a neutral scientific laboratory free of any territorial sovereignty is sound.

Yet the squabbles and tensions initiated by Pope Alexander, then passed on to Chile and Argentina some 500 years later, would be comical if the stakes were not so high.

In the meantime I cannot help but think that Pope Alexander is smiling down upon Chile and Argentina, knowing that in some small way, they too proudly and publicly produced a bevy of children to establish credibility!

—–In Valencian slang, ‘Borgia’ has become a byword for libertinism or one devoid of sexual constraints, quite descriptive of one of their native sons!

—- The legacy of Rodrigo Borgia has enjoyed a comeback in today’s popular culture. In 2011, Jeremy Irons won a Golden Globe Award as Alexander VI in the Showtime series The Borgias.

— More than a dozen books, both fiction and non-fiction, characterise the colorful legacy of Pope Alexander VI.

—-Mario Puzo’s last novel, Los Borgias (The Family) was based on the debauched lifestyle of the family. The author of The Godfather series once said that many ideas in his Mafia novels were inspired by the notorious Renaissance pope.