A MARBELLA Walking football side will be joined by a former Celtic star this month.
The local club in Elviria will be joined for the June 8 session by Adam Virgo, 34.
A winner of the Scottish Scottish Premier League in 2006, Virgo also won League One and Two while at Brighton and Hove Albion.

He now works as a pundit for TalkSport Radio and Channel 5 in the UK.

Aimed primarily at the over 50s, the sport continues to grow, with almost 1,000 clubs in the UK alone. 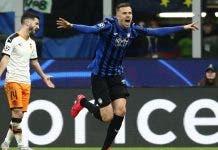