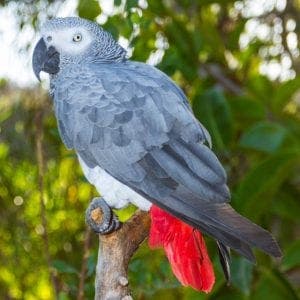 A PSYCHIC has had a vision of a Brit expat’s lost pet.

Paul Hickling, who is searching for his chatterbox parrot, Ruby, has had information from a local clairvoyant who has said the bird is caged up in a house overlooking a field or garden.

She said the three-year-old African grey parrot is with someone who speaks to her in English sometimes, and that there is a disabled person in the house.

She also claims she is not happy because she misses her ‘little friend’.

Paul was shocked by the news, having not mentioned Ruby was married to another parrot, Rocko, before the reading.

He is offering a €500 reward for anyone who returns the bird after she went missing from their Manilva home six weeks ago.

“We are devastated by it. Not only is she a fantastic talker, but she is a part of our family,” he said.

Although she has no distinctive physical features, ‘I would know her straight away,’ he continued.

The talker makes a regular appearance at his restaurant Roman Oasis, where she has become quite the attraction thanks to her bubbly personality.

At home, she orders the dog around and says ‘goodnight daddy’ before she goes to sleep.

DIDN’T SEE THAT COMING: clairvoyant jailed for conning disabled woman out of €13,000 on Spain’s Costa Blanca