SINCE the 1970s, Spain has been ahead of the pack when it comes to LGBT rights.

The nation’s rapid ascension into the 21st century came after decades of Franco rule, which saw sexual minorities imprisoned or even killed simply for being who they are, including the legendary poet Lorca.

But when Franco was finally toppled in the 1975, his ‘Vagrancy Act’ was abolished, kick-starting the country’s march towards equality.

The year 1979 welcomed Madrid’s first Gay Pride march, attitudes drastically softened during the 1980s while the 90s saw the election of the first openly-LGBT member of a regional parliament in Catalonia.

Then in 2005, Spain became one of the first countries in the world to legalise same-sex marriage and in 2007 it was hailed as having the most developed LGBT rights in the world.

In celebration that year, it held Europride in Madrid, and welcomed more than 2.5 million people over the course of one week.

While Gibraltar was slower off the mark, it proudly made same-sex marriage marriage legal last year.

With June being International LGBT Pride Month, we focus on the trailblazing ‘rainbow warriors’ of Andalucia and Spain. 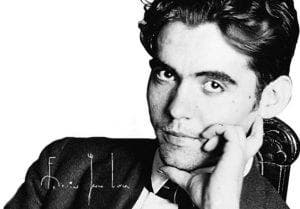 Lorca achieved international recognition as an emblematic member of the Generation of ’27, a group of poets and writers who introduced the tenets of European movements – including symbolism, futurism, and surrealism – to Spanish literature.

Lorca’s writing was considered deeply homoerotic and was banned until 1954 and censored until 1975, while his family rarely spoke of it.

Even as late as the 1980s, when Sonnets of a Dark Love was posthumously published, its title was changed to Love Sonnets.

Lorca, who is believed to have been in love with the artist Salvador Dali, was executed by Spanish Fascists in 1936 after he took refuge in a friend’s house in his hometown of Granada.

It is said that one of the men on the death squad claimed to have ‘fired two bullets into his ass for being a queer.’ Lorca, whose body has never been found, is believed to have been killed for being homosexual, as well as for his left-wing beliefs. He has become a symbol of the crimes of the Spanish Civil War. 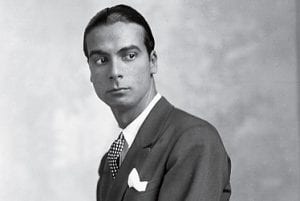 Balenciaga was a Basque fashion designer and the founder of the Balenciaga fashion house. During the 1930s he lived openly with his lover, the French-Polish aristocrat Wladzio d’Attainville, above his Paris atelier.

As a couturier, he had a reputation for his uncompromising standards and was referred to as ‘the master of us all’ by none other than Christian Dior.

Coco Chanel said he was ‘the only couturier in the truest sense of the word’, adding that ‘the others are simply fashion designers’.

To this day he is revered as the supreme deity of the European salons and is known as ‘The King’.
Since 2011 the purpose-built Museo Balenciaga exhibits examples of his work in his birth town Getaria. Many of the 1,200 pieces in the collection were supplied by his pupil Hubert de Givenchy and clients such as Grace Kelly. 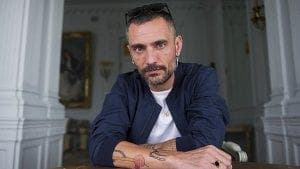 Malagueño Delfin was world-renowned in the fashion industry.

The 46-year-old, who tragically passed away from cancer this month, first made his mark as one of Spain’s most provocative designers by covering models’ faces with hoods and putting nooses around their necks at the Pasarela Cibeles fashion show in 2002.

Prime Minister Mariano Rajoy paid tribute to the designer after his death.

In a telegram sent to Delfin’s family, Rajoy said he ‘was one of the most charismatic and creative fashion designers in Spain’ who ‘leaves an incomparable legacy’.
Delfin founded his studio in Madrid in 2001 and was later praised for ‘developing his own avant-garde universe.’ 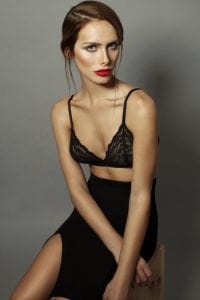 Ponce was the first openly-transgender woman to compete for the Miss World Spain title.

The 25-year-old Sevillana, who was representing Cadiz,  lost out to Miss Barcelona in the 2015 pageant.

She had been the favourite to win the title, but failed to make it to the final ten in the beauty show, which was held in Estepona.

She said: “I have the regional crown on my head and I will keep fighting to make us seen, to make us heard and to demonstrate that I am already a queen with my own crown.” 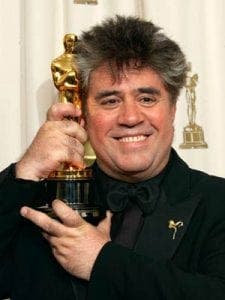 One of Spain’s most internationally successful film directors, the openly gay 67-year-old from Ciudad Real came to prominence during La Movida Madrileña, the cultural renaissance that followed the death of Franco. Early films like The Law of Desire (1987), themed on a gay love triangle, captured the sexual and political freedoms of the period. Although the man from La Mancha dislikes being branded as a ‘gay filmmaker’, his movies are well known for challenging traditional ideas, and transgenderism and homosexuality are recurring themes. 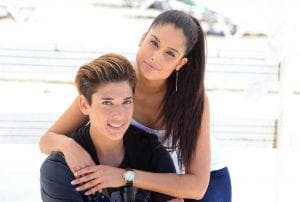 Former Miss Spain Yurena came out as gay in 2015.

The beauty queen shared a photo posing intimately with her girlfriend, Spanish DJ Vanesa Klein, with the caption ‘Romeo and Juliet’.
Yurena held the title of Miss Spain in both 2008 and 2013, and told Spanish press that she came out because it made her happy to be in a relationship with Klein. “I did it because I am happy about what’s going on in my life,” she said.
As the first openly gay national beauty queen, she has opened the door for other women to be true to themselves. 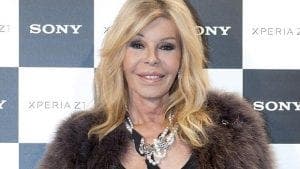 Bibiana was born with the name Manuel and spent her childhood in Málaga. She later went to Barcelona to fulfil her dream of being an artist. After a period of making shows in several of the city’s vaudeville haunts, she made her debut into the film business with a Vicente Aranda film, Cambio de Sexo (Sex Change).
She was soon famous across Spain, making appearances and releasing several single song hits such as Call me Lady Champagne and Sálvame (Save Me).

In the 1980s, she began working with Almodóvar, and performed in many of his films before hosting several TV shows. 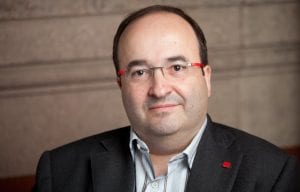 Miquel became the first the first openly-LGBT member of a Regional Parliament in Spain when he was elected in Catalonia in 1999.

The 56-year-old is currently First Secretary of the PSC (Socialist’s Party of Catalonia).

He spoke out against independence for his region in March, saying it would be a ‘nightmare’.

“It would be so much like recognising that you are unable to find a good relationship with your neighbours,” he said. 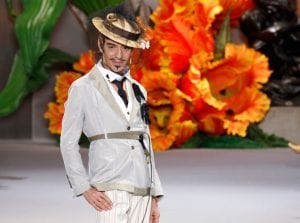 John Charles Galliano is a Gibraltar-born British fashion designer who has headed French fashion companies Givenchy, Christian Dior, and his own label John Galliano (1988 to 2011).

The 56-year-old is currently the creative director of Paris-based fashion house Maison Margiela.

He first studied at the Saint Martin’s School of Art in London, where he graduated in 1984 with a first in Fashion Design. His first collection, inspired by the French Revolution and entitled Les Incroyables, received positive reviews and was bought in its entirety for resale in the London fashion boutique Browns. He then started his own fashion label alongside long-term collaborators Amanda Harlech. He soon rented a studio space in London, but his love for London’s nightlife soon took its toll.

After becoming bankrupt, he moved to Paris in search of financial backing and a strong client base. He won the support of Moroccan designer Faycal Amor, who invited him to set up his base in Paris. His career has been on the up ever since. Galliano has been named British Designer of the Year four times, received a CBE and a French Legion of Honour. 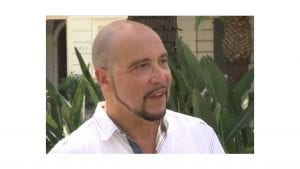 When Alvarez tried to bring his non-EU, same-sex partner to the Rock, he was shocked by the insurmountable bureaucracy and prejudice he encountered.

As deputy leader of the Independent Liberal Forum (now defunct), he persuaded his party to back him in the establishment of what was to be known as Gib Gay Rights (GGR). In a GBC television news broadcast in 2000, Alvarez said ‘the fear factor’ was over as far as gay citizens were concerned and that from then on, they would be demanding equal rights as full citizens of Gibraltar. As the work of the group expanded over the years, GGR became Gibraltar’s foremost Human & Civil Rights organisation. Now known as the Equality Rights Group, it has been at the forefront of the LGBT movement on the Rock and was instrumental in pushing for same-sex marriage legislation. 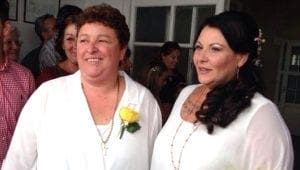 The Muscats were the first same-sex couple to be granted a civil partnership on the Rock.

They are currently fighting to have their partnership recognised as a full marriage, which was not available back in 2014.

“Being granted the partnership was like doors were starting to open and at least we had some rights, but what we really wanted was marriage – we wanted equality,” said Nadine.
“It’s about my rights as a human being to be able to marry the person I want, whether it’s a man or woman.” 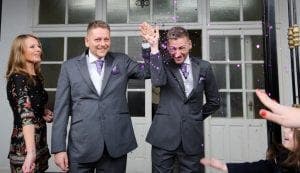 Aaron and Adrian
Aaron Mills and Adrian Charles Triay-Dignam became the first same-sex couple to get married on the Rock on December 16 last year.
Aaron, who works for the Borders & Coastguard Agency, fell for Adrian while checking his passport. Eventually he asked him out and the rest is history.
The fight for equal marriage in Gibraltar took four years to win. It was fronted by the Equality Rights Group from 2012, when the Rock lowered the consent age for same-sex sex to 16.

The couple had set their wedding date for December 2016 the previous year, unaware that the marriage act would pass in time.
The pair received warm congratulations from Chief Minister Fabian Picardo.