A TALENTED British actor has vowed to never return to Malaga after he was allegedly refused entry to a nightclub because he is black.

But their trip turned sour when the pair were refused entry to popular city centre club Sala Wenge, according to their skin colour, they claim.

After they approached the door they were told they had to be wearing polo shirts instead of t-shirts, and so were turned away.

“We looked at people inside the club and lots of the guys were wearing t-shirts, so we knew they were just trying to make up stupid excuses,” continued Callender, who is playing the key roles of James Madison and Hercules Mulligan in Hamilton.

The pair were also asked to show their student IDs, which is not the club’s door policy.
Their story came to light after British club promoter Beijan Abdullah approached the Olive Press in a bid to expose what he claims is an alarming ‘no-blacks’ policy at the club.

The 22-year-old London law student, who was working for Sala Wenge at the time, told the Olive Press: “I knew something strange was happening because the bouncer asked for their student IDs which they didn’t do with white people.

“It was clearly just an attempt to find an excuse to keep them out.” 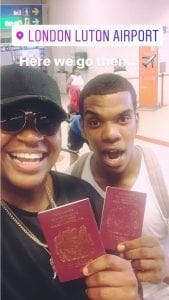 Abdullah, who was on an Erasmus placement for the summer, claimed his manager chastised him for bringing the pair to the club, after hooking them in on a street nearby.

“He made excuses saying I couldn’t bring people ‘like that’ in the club. they are ‘not dressed properly’, and we ‘don’t know where they’re from’.

“He said ‘we didn’t know if they have papers or who they are’.

“I asked him straight out if it was because they are black, and he laughed nervously and said ‘yes’.”

He is now convinced it is the club’s policy to refuse entry to black customers after others were also turned away.

The Olive Press approached the nightclub on several occasions, but it failed to comment in time for press.