A BRITISH hairdresser killed herself in Spain after her boyfriend took an early flight home following a row-filled holiday, an inquest has heard.

Cara Keirl, 28, was arguing with her partner James Kane throughout the drink-fuelled trip.

The inquest heard how Kane flew home just five days into the holiday following a nasty fight in their hotel room.

Cara, from Gloucesteshire, was then found hanged by a maid the next day.

She is believed to have been hanging in her Ibiza hotel room for up to 16 hours before she was discovered.

The couple had been staying at the Cartago Hotel in Puerto de San Miguel.

Kane told the inquest that if he were to rate her physical violence towards him in Ibiza it would be ‘ten out of ten’.

He added that he flew home ‘to safeguard himself’.

Her mother Cheryl Kenney said her last conversation with her daughter was at 1am on June 9, just hours before she died.

She said her daughter complained that she and her boyfriend had had physical fights.

Kane said he had begun a relationship with Cara in 2014 and later moved into her home with her parents in Worcester.

“I’m aware she had problems in the past,” he said.

“I believe she was a crack cocaine user but managed to get off the drug by locking herself in her parents’ house. 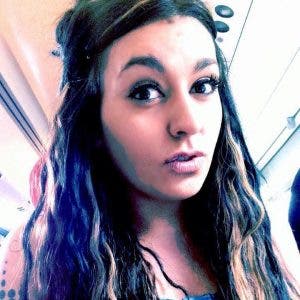 “As far as I’m aware she didn’t use any Class A drugs during our relationship.”

He described Cara as “very fragile” and said she used alcohol as a “crutch”, sometimes downing three bottles of wine in one sitting.

“Some time during 2013 she tried to take her own life – she was living with her parents at the time,” he said.

“We moved out of the family home during February 2015 and had financial problems from the outset.

“Cara was very stressed and wasn’t working much.

“She was a very good hairdresser but was struggling to see her clients as a result.”

The couple began drinking at 11am the morning after they arrived on the Balearic hotspot.

Kane said Cara was ‘very drunk’, so he left her at the bar and went to get a soft drink.

He said he found her talking to her mum on the phone, saying she ‘might as well be on holiday on her own’.

At midnight he said he spotted her ‘hammered’ so they went back to their hotel room where a fight broke out about their families.

Cara bit his finger hard and hit him with a can of hair spray before pinning him against the wall, at which point he kicked out at her upper leg, he said.

Father-of-two Kane, said he had to fly home to ‘safeguard’ himself because he might be accused of doing all sorts of things if he stayed.

“I was messaging Cara and trying to persuade her to come home,” he said.

“She called me and stated that she didn’t believe I was in the UK. This was the last time I spoke to her.”

Kane said he was unable to work for 18 months after her death.

He added: “Cara was the most inspiring and uplifting person. There isn’t a day that goes by that I don’t think of her.”

Assistant Avon and Somerset Coroner Dr Peter Harrowing said: “I am satisfied beyond reasonable doubt that Cara did carry out an act with the intention to take her life.”