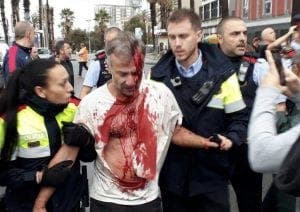 ALMOST 1,000 people were injured while trying to vote in the Catalunya referendum yesterday.

According to the Catalan health service, 893 people received medical attention as a result of injuries sustained during clashes with police.

Four of those people were seriously injured but stable.

The staggering figure is more than double the amount of civilians and police injured in the 2010 and 2011 protests in Greece combined.

Both anti-austerity protests happened over several months and saw around 400 injuries.

Alex Trelinski - 18 Oct, 2021 @ 11:40
TWO members of a European 'hugging' robbery gang have been detained on the northern Costa Blanca. Police said the group have notched up arrests in...