AN expat claims his business has been left in ruins, after roadworks began without warning.

The former chef to the stars claims his Costa del Sol restaurant will probably be forced to shut after being told the works are likely to continue ‘until December’.

Irish expat Larry O’Rourke, 47, was devastated after he arrived at his oyster bar Larry’s in Fuengirola to find the road outside was being dug up by a group of builders.

All access had been cut off and he was told he was not even allowed to enter his restaurant of eight years to save the produce.

“There is literally no way I can serve my clients for at least two months. They have totally destroyed me,” O’Rourke, from Galway, told the Olive Press this week. 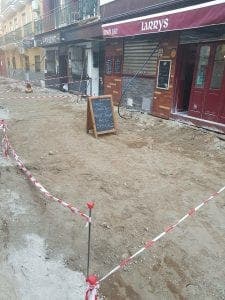 The former private chef of famous dancer Michael Flatley, only discovered an unaddressed last-minute warning had been put through his letter box the same day.

It stated that the surprise ‘infrastructure works’ would last for 28 days.

“However, the builders told me to expect at least double that,” he said.

He continued: “October would normally be one of my best months as the town’s full of golfers. I’ve been fully booked two or three days in advance.

“But now I’m probably going to have to sell the business due to this.”

O’Rourke was locked out of his business for over a week before the town hall created a special access path to give him and his clients a way in.

It came following a complaint from his lawyer and after losing ‘around €10,000 in takings’ from lost bookings.

“That came after I invested my life savings of €20,000 into the place last year. Now I have nothing left.” 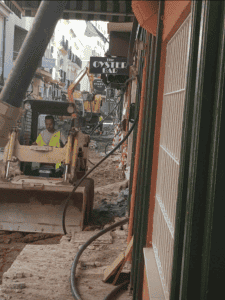 He continued that the works come after years of battling Fuengirola town hall over music problems.

He has been forced to attend court ‘up to ten times’ for numerous fines for playing loud music while ‘cops turned a blind eye’ to Spanish bars doing the same nearby.

Fuengirola told the Olive Press the works were to ‘upgrade’ the street cosmetically and ‘improve infrastructure’.