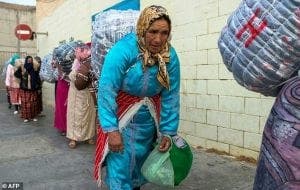 TWO Moroccan women have been trampled to death during a ‘crush’ at Spain’s border with Morocco.

The pair, around 40 years of age, were reportedly working as porters, carrying goods into Ceuta, when the hundreds of people trying to enter the enclave began to mount at around 5.30am.

Authorities say the ‘crush’ took place on a hill closest to the Moroccan frontier post of Bab Sebta.

It is here where authorities separate porters entering Ceuta from domestic workers going into the city, with porters entering the Spanish territory through the Tarajal II pedestrian crossing point and other workers using a different crossing.

Since last summer, women have been allowed to carry goods into Ceuta every Monday and Wednesday, while men have been permitted on Tuesday and Thursday.

However long queues of people and vehicles are still reported by Spanish media.

Reports say hundreds of people usually wait during the night for the opportunity to take their goods into Ceuta in the early hours of the morning when the frontier opens.