THIS is the moment two mountain goats in Spain locked horns before one plunged to its death.

The police officer said: “I’ve spent three years looking for a fight like this in a high mountain area with snow and in a clean environment.

“It was a feeling of satisfaction to be able to take these photos after the patience and perseverance.

“I have been through adverse weather conditions including rain and snow storms as well as sub zero temperatures.”

The fight to the death was over a herd of female goats and lasted for 20 minutes.

Nuleagus added: “It was very strange to see them fighting on the cliff edge. They fought until one gave up and jumped off the edge.” 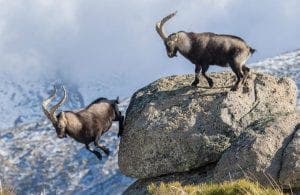