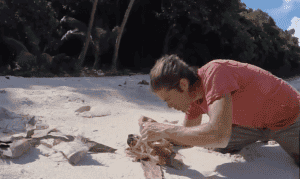 THIS is the moment a Malaga castaway makes fire using a plastic bag filled with water.

Alvaro Cerezo is a professional Robinson Crusoe after visiting more than 400 unchartered territories.

He decided to abandon traditional modern day life and switch it for surviving in the world’s most unspoiled locations at the age of 19. 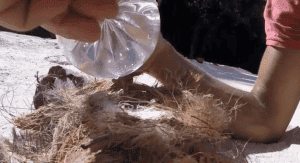 The Malagueño, 36, makes his money by abandoning brave holidaymakers on far-flung desert islands to survive for days or weeks at a time – after he has tested them himself of course.

In a clip obtained by the Sun, Alvaro uses a plastic bag on the remote islands in the Phillippines in the same way as a magnifying glass to pinpoint the sun’s  rays onto dry coconut kindling. 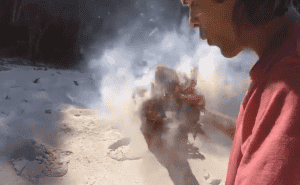 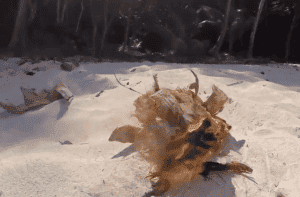 The survival expert said: “I have used this method to make fire so many times.

“People are usually surprised you can use a plastic bag to make fire – they normally cannot believe it.

“If explorers don’t carry plastic bags with them, there are always some on the shore of any desert island that have been pulled from the sea.

“The problem is most of them have little holes which would make the coconut hair wet, meaning it would be impossible to start a fire.

“Because of this you need to be lucky to find the right plastic bag, as it also must be transparent.

“Once you fill it with water – either fresh or salty – you need to create a round shape by pressing the sides.

“Then, the water creates the same effect as a magnifying glass.”

Alvaro set up Docastaway in 2003 after staying on an island on the remote archipelago of Andaman and Nicobar in India and realising he could never work in an office.

He has helped more than 500 people from all backgrounds experience the castaway experience from around €1000 per week.

He was born into a well-off family in Málaga. Three years ago, he told New York Times Style Magazine he felt people from his home port led ‘lives of quiet desperation’.

He said: ‘‘I have never been truly happy in a city, not any city, not ever.

“The only way I can describe it is an uncomfortable feeling, like itching.’’

Cristina Hodgson - 27 Sep, 2022 @ 09:15
TOURISTS have returned in force to Malaga City after the pandemic—with 315,000 overnight stays recorded during the month of August. This week the National Statistics...