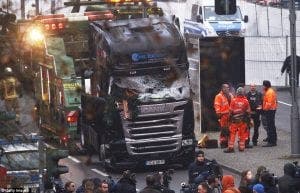 ceSPANISH police have issued a public warning about a stolen lorry similar to the one used in the Berlin Christmas market attack in 2016.

Catalunya cops are concerned about the HGV’s disappearance because carnivals are about to begin in the region.

The vehicle is a 3.5 tonne Volvo with a white cabin and blue trailer and was taken from a haulage firm in Castellbisbal, a 45-minute drive north-west of Barcelona overnight on Sunday.

Local reports said the stolen Volvo lorry – numberplate FL618 B250 – had the inscription J.Pou on the driver’s door next to a Spanish mobile phone number.

An internal Mossos document, outlining a detailed description of the vehicle, said: “Between February 4 and 5 a 3.5 tonne lorry was stolen from the premises of a firm in Castellbisbal.

“Given that we are currently on terror alert level four and next week activities are being held to coincide with annual carnivals, we feel it is appropriate that this information is broadcast as soon as possible.”

The police force confirmed in a tweet: ‘We are investigating the theft of this lorry in Castellbisbal.’

UPDATE: The truck has been found