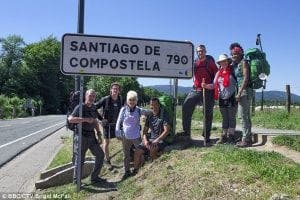 A HOST of seasoned celebrities have taken part in Spain’s most famous pilgrimage as part of a new TV show.

The celebs gave up their luxuries and challenged their beliefs as they took part in a 500-mile religious pilgrimage.

They walked the Camino de Santiago together with modern-day pilgrims from Saint-Jean-Pied-de-Port in the French Pyrenees to Santiago de Compostela, in Galicia, Spain.

The celebrities, made up of comedians, pop stars and entertainers, took just the possessions they could carry in a backpack as they journeyed to the cathedral of Santiago de Compostella for BBC Two show Pilgrimage: The Road to Santiago.

But despite taking part in the grueling religious journey with hundreds of other pilgrims, there was very little piety on show among the celebs.

Instead, arguments, weariness and swearing dominated the trip.

The Camino pilgrimage, also known as the Way of St James, has enjoyed a resurgence in popularity in recent years with 278,000 making the trek in 2016.

It had previously dwindled in popular culture, particularly in England after Henry VIII led a campaign against the pre-Reformation church.

The ragtag group of celebrities was made up of atheists as well as a priest and believers – making it an interesting watch as they retraced the steps of medieval pilgrims.

There was discussion about personal beliefs and values with some of the celebs fearing they might ‘catch religion’.

Rowe described the trip as ‘eye-opening’ and told the Observer: ‘It was eye-opening. It made me think differently about myself, about other people, about religion and faith. I learnt more about religion [on the camino] than I ever have in my life.’

The journalist also revealed that the trip restored his faith in people’s honesty and motivations.

Singer Small said the journey strengthened her faith, even though she was questioned about her colour when they stopped at a monastery.

Vicar Bottley admitted that she found the physical demands of the challenge extremely difficult, after initially expecting a spiritual experience.

She also said that she had never sworn so much and that the journey was ‘more painful than childbirth’.

The vicar confessed that she found the group’s religious debate very tough and felt under pressure to explain her faith.

She said: ‘There were a couple of moments when I feared my theological rigour wasn’t enough to carry the debate.’

The celebs stayed in pilgrims’ hostels and had to walk in extreme heat and driving rain.

They said that the experience created a bond between them and that they have stayed in touch after completing the Camino.

Pilgrimage: The Road to Santiago will air on BBC Two on Friday at 9pm.