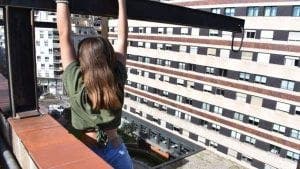 A TEENAGER has been rescued after trying to take a ‘daredevil selfie’ in Spain.

The 14-year-old girl was hanging from an eighth-floor ledge in Eixample, Barcelona, after falling while trying to snap a pic.

A friend of the unnamed girl called police who quickly came to the rescue.

Police said they found her frozen by vertigo while suffering a panic attack.

Cops tweeted a photo of the girl and the moment she was rescued.