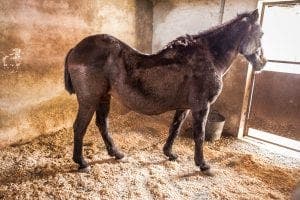 A STARVING horse has been rescued after she was found being beaten by a group of thugs in the Costa Blanca.

The animal is said to have ‘horrendous’ spinal scars caused by an ill-fitting saddle and a deformed spine from being ridden too hard from a young age.

San Javier Police found the thin mare and sent her to non-profit organisation, Easy Horse Care Rescue Centre in Rojales, where she is currently being treated.

It is believed the local police are struggling to cope with the amount of cases of animal abuse they encounter. 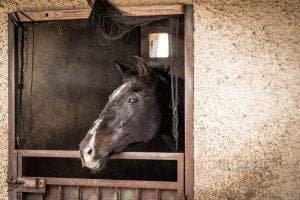 The mare, which the rescue centre has named ‘Beauty’, is also suffering from a loss of elasticity in her suspensory ligaments, which could cause them to collapse and leave her in a critical condition.

Founder, Sue Weeding, said: “How on Earth could we have said ‘no’ to saving this poor old soul.”

Beauty is the centre’s 113th rescued animal and is starting to make a recovery.

Donations can be made at www.easyhorsecare.net/donate/one-off-donation

Alex Trelinski - 9 Aug, 2022 @ 16:30
A man who pretended to be a professional footballer to con his new girlfriend out of money has been given a two-year-jail term by...