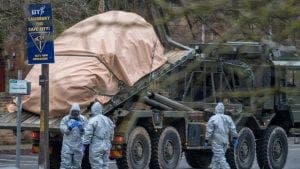 The Spanish government will join more than 20 countries which have stood in solidarity with the UK, collectively expelling over 100 diplomats.

A statement from Spain’s foreign ministry reads: “From the beginning, the government of Spain has considered that the attack perpetrated in Salisbury through the use of a neurotoxic agent is a fact of extreme gravity that represents a serious threat to our collective security and international law.”

Russia continues to deny its involvement in the vicious attack on former Russian double agent, Sergei Skripal, and his daughter, Yulia.

Prime Minister, Theresa May, revealed that the pair remain in a coma in hospital and it is unlikely they will recover.

It is thought a further 130 people could have been exposed to the nerve agent.

The Prime Minister and Foreign Secretary, Boris Johnson have praised EU allies for their support.

“I have found great solidarity from our friends and partners in the EU, North America, NATO and beyond over the last three weeks as we have confronted the aftermath of the Salisbury incident,” said Theresa May.