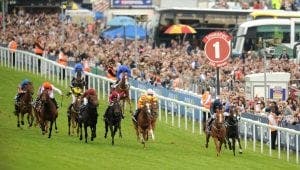 After watching Cheltenham Festival and The Grand National come to pass, a lot of horse racing fans set their sights on The Epsom Derby, which traditionally takes place at the start of June. Last year’s edition of Epsom Derby Day finished in a memorable fashion, as 40/1 priced Wings Of Eagles won The Derby, shocking the world through a massive outsider surpassing all three favourites.

In the build-up to one of the UK’s most favoured sporting events, some bookmakers have already made their odds available on all thirty-one horses involved, making it easier for punters to back their chosen horse prior to the race taking place. The Winners Enclosure also make sure to be the first to all the horse racing action. Their site is worth checking out for all the horse racing tips, previews, and the strongest odds from the best bookmakers.

Current odds rank all thirty-one horses in order of their chances based on form and past results in similar Tvg Horse Races. Check out a selection of participating horses below:

It’s no surprise to see Saxon Warrior as clear favourite to win The Derby, as he’s won all three of his previous races, giving him an impressive 100% record. The original starting price was 10/1 but moved over to 8/1 and 5/1 before reaching a price that makes sense of the incredible form this horse is in. With odds continuing to fall, any punters who intend on backing this horse would be advised to do it sooner rather than later.

Sitting as second favourite, The Pentagon entertains a record of three places and two wins from four runs, which gives him a 50%-win record and a still worthwhile 75% place ratio. When the odds were first made available, The Pentagon was priced with the same odds of Saxon Warrior but that eventually changed due to Saxon Warrior’s superior record.

Third favourite is Amedeo Modigliani, who’s only been involved in two runs but won one and was able to place in both, which looks very promising but leaves a lot to be desired over reliability, as just two races is very little to go by. Odds for this horse originally started at 18/1 but dropped based on the poorer records of other horses in contention.

After mentioning our selection of horses, there’s twenty-five others with perfectly likely chances of winning Epsom Derby but it’s certainly worth seeing the horses with the biggest odds after last year’s winner was given a starting price of 40/1. First Eleven has placed one of three runs but is yet to win, making sense of the uncertainty which comes with backing this horse.

Similarly to the other horse priced at 50/1, Latrobe is yet to win a race and has barely appeared in one, only running once prior to Epsom. The fact that he placed in that race does give some hope, as he sits with a 100% place ratio, but it’s far from worth backing, unless you like an outside bet that’s massively unlikely to land.

Some of the more superstitious horse racing fans see there being some magic in Epsom Derby Day and that’ll certainly be needed if highest priced The King manages to win. The King’s record isn’t even that bad, running twice, winning one and placing one, but the bookies clearly don’t rate it, and that’s enough to put us off recommending it.

Traffic restrictions TODAY in Malaga for Tour of Spain