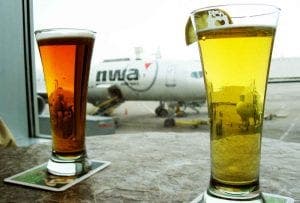 In a bid to crackdown on boozy in-flight incidents, passengers could soon be slapped with new penalties costing a few hundred pounds.

It comes as ministers are investigating the possibility of giving airport police officers the power to hand out immediate fines, without having to go through the courts, reported The Times.

Passengers may soon need to place bottles of booze in a sealed plastic bag before boarding the flight.

The new discussions are part of a strategy by the Department of Transport to clamp down on drunken mid-flight violent incidents.

This year, the International Air Transport Association reported a 50% increase in passengers who had to be forcibly contained for bad behaviour, which ranged from verbal attacks to life-threatening incidents.