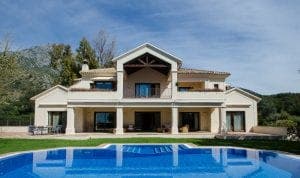 WITH almost one in every three customers of Genius Properties being referrals, the company’s reputation speaks for itself.

“From day one we know what can and can’t be done, either legally or feasibly and can help a client narrow down their options to a point where the client himself is in informed enough position to decide the best way forward,” explains owner Neil Parsons.

After living in central Estepona for over 10 years – and the surrounding the areas for much longer – Neil is adamant that his local knowledge has been the key to expanding the business and making it through the financial crisis.

Having previously been an engineer in the British Armed Forces before moving into investment management, scouting and acquiring properties, Neil’s disciplined and analytical mind means that he revels in making sure you are always getting the best deal and that ‘The job is done properly” as he puts it.

Foreign investors, downsizers or anyone simply looking to relocate can all be catered for from a budget in the ‘late hundreds of thousands to upwards of two million euros’.

If you are a homeowner, who lives abroad, you will be kept in the loop on your property via video and whatsapp so you can always relax in the knowledge that someone is taking care of everything whilst you are away.

“Strength is no longer in office or staff numbers, it’s in the ability to harness the array of tools the modern World provides us with and utilise well established local connections, that’s what makes the difference” adds Neil.

Meanwhile, the team of four are likely to speak your language, covering in particular English, Spanish and German among others.

“We may be small, but we are efficient and well integrated. We are like an adopted family in the community and I love that,” he said.

“We have access to every listing in Estepona old town and our reach goes much further than that.”

All aspects can be completed by Neil and his team, from buying to selling, and from holiday lets to project management on both commercial and residential properties as the team also run a registered construction company.

Visit Genius at www.geniusproperties.com or the team from 9am on Monday to Friday at Calle San Nicolas 8. Call 952806373 for the office or call Neil directly on 633913773