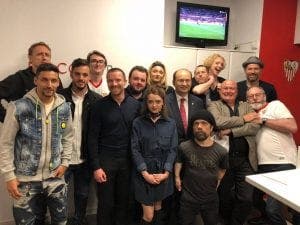 THE presence of the Game of Thrones cast during a football match in Andalucia has given new clues to how the next season will shape up.

The actors took a break from filming the eighth season last night to visit the Sevilla football team.

The presence – or lack thereof–  of actors who play certain roles in the fantasy series gave some clues as to who will be in the final episodes.

The hit show has been filming in the Roman ruins of Itálica, in Santiponce, very close to Sevilla.

The group of actors who attended the Sevilla-Real Madrid Liga match indicates that the Dragonpit and King’s Landing will be key locations in the last season.

The actors are staying in the Hotel Alfonso XII and the likes of Peter Dinklage have been seen making visits to the nearby Cádiz town of EL Puerto de Santa María, to the restaurant Aponiente, headed by chef Ángel León.

The final season of Game of Thrones will consist of just six episodes – each lasting more than an hour – will be released in 2019.