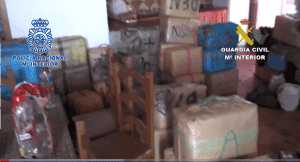 A HUGE drug trafficking network has been busted in Manilva.

Some 23 alleged members have been arrested under suspicion of drug trafficking and armed robbery while a staggering 3.5 tonnes of hashish have been seized.

Police have also frozen assets worth more than €254,000 following a two-year investigation which revealed a smuggling operation that had become EU-wide.

The probe began when a car fled a routine check in Manilva in September 2016.

It was found abandoned and stashed with 82 kilos hashish.

It was then that Guardia Civil teamed up with the Policia Nacional and operation Galeon-Tablet began.

The probe, using undercover agents, unearthed a large-scale criminal organisation operating out of Manilva and Malaga.

It was headed by two men, one Romanian and one Spanish, and was known for its ruthless tactics.

It regualrly carried out revenge shootings and took no prisoners when settling scores related to drug trafficking.

The international organisation operated in Poland, Romania, Lithuania, Latvia, Morocco and Spain, but most of its workers were based in Malaga and Cadiz.

The group rented houses across the Costa del Sol where they regularly stashed drugs, mostly hashish from Morocco.