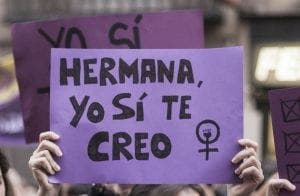 THE number of reported rapes in Spain increased by 28.4% in the first three months of this year, reveals official new data.

Figures released by the Interior Ministry on Thursday show a significant rise in ‘sexual assault with penetration’ from January to March this year.

Police received 371 complaints during the time period – an average of more than four a day.

Andalucia was one of the regions with the highest amount of rape reports.

Catalonia saw a total of 110 reports during the three months, Madrid received 62, while Andalucia recorded 41.

It seems more victims are coming forward in increasing numbers following the #Cuentalo and #Metoo movements.

It comes after the highly controversial ruling of the ‘wolf pack’ gang rape attack, in which the five defendants were cleared of rape for a lesser charge of sexual assault.

It triggered a Spanish and Latin American #MeToo movement, with women tweeting their experiences of sexual assault using the hashtag #Cuentalo, in solidarity with the victim.

During the three months, the report revealed a staggering 3,025 crimes against sexual freedom, such as rape and other forms of sexual violence.

This means reported cases saw an almost 14% increase from the same time period in 2017.