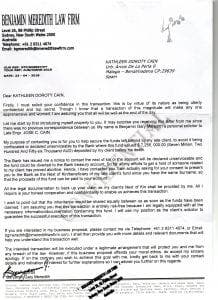 A BRITISH expat has warned of a scam targeting elderly residents on the Costa del Sol.

Kathleen Cain, 74, from Yorkshire, received a letter to her Benalmadena home last week claiming to be from Australian law firm Benjamin Meredith Law.

The letter told her she was to inherit more than seven million Australian dollars (€4.4 million) and offered her the ‘opportunity’ to split the money with the firm before encouraging her to email or get in touch by phone.

“I could tell it wasn’t legitimate, the stamp showed it had come from Portugal,” Cain told the Olive Press.

“But I am very worried that some other elderly person could open a letter of this kind thinking it could be authentic.

“There are some really vulnerable people out here who could easily become targets.”

Have you received a similar letter? Get in touch at newsdesk@theolivepress.es