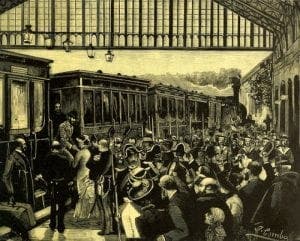 JOHN Lennon and Yoko Ono’s musical composition Give Peace A Chance is considered the unofficial anthem for the American nightmare known as the Vietnam War.

That long and unpopular conflict, like most wars, was replete with death, destruction, dislocation and dissent. Lennon’s lyrics, asserting that the absence of war equates to peace, profoundly resonated with the sentiment of the times.

Yet brotherhood, good humour and fellowship were the defining characteristics of a strange 100 year ‘war’ between a small Andalucian municipality and the Republic of France. How was that possible?

Lijar is a small (500 inhabitants) isolated hilltop hamlet in the interior of Almeria. A two-hour drive inland over some curvy mountain roads, mulberry trees used in the Arabic manufacture of silk still grow on the hillsides.

But what is the most impressive part of Lijar’s history is what happened over a century ago. Local oral tradition has it that in 1883 King Alfonso XII of Spain made a state visit to Paris.

It did not go well. He was insulted, spat upon and showered with stones and rotten eggs. When word of this disrespectful visit got back to Lijar, Mayor Miguel Garcia called for an emergency village council meeting.

Outraged, and with his Spanish pride dented by the insulting French display, Mayor Garcia took action. The minutes of that council meeting proclaimed that: ‘Our King Alfonso, when passing through Paris, was stoned and offended in the most cowardly fashion by the miserable hordes of the French nation.’

The mayor reminded his council that when Napoleon’s troops had invaded the area 80 years previously, ‘just one woman, who was old, wretched and bedraggled, but a daughter of Spain nonetheless, had single-handedly cut the throats of 32 Frenchmen who were billeted in her home.’ He added: ‘The example of this woman is enough to let the inhabitants of France fear this village of Lijar. Although it has only 100 able men, we propose to declare war on all of France since one man of our village is worth 10,000 Frenchmen.’

The council meeting concluded with a unanimous vote to formally declare war on France.

The council took the time to announce the formal war motion to the Spanish government in Madrid, and by messenger to the president of France.
Lijar remained ‘at war’ with France for the next 110 years.

Although no shots were fired, nor prisoners actually taken, citizens never forgot. Village schoolmaster Ezequiel Campos recently referred to it: “We were in a state of war and everybody in Lijar knew about it, he recalled. “It’s been handed down from parents to children, a sort of oral tradition.”

Locals in Lijar are prone to tell colourful stories of their experiences of meeting the occasional French tourists passing through the town.

The residents would feign hostilities and war games against the unsuspecting visitors. But when told the story, the two factions often ended up with a shared drink or meal ending with an embrace as friends.

There are also a number of personal accounts of travelers from Lijar who, while visiting France, would take the time to explain their ‘declaration of war’ to their unsuspecting French hosts.

Both parties would often laugh and enjoy the fellowship. To this day, lifelong friendships between the ‘warring factions’ remain in place.

The stories that the war produced seem to have brought forth the fact that, for the most part, both sides were warm and friendly people, prone to laugh at their ancestors’ intentions.
Finally, in 1993, Mayor Diego Sanchez called for a peace treaty. He proclaimed: “One hundred years is a solid enough date to end all of this. Stopping a war can’t be a bad thing nowadays, can it?”

Dignitaries from France and Madrid attended a formal peace treaty ceremony which was signed in the only square in Lijar. It used to be called Plaza Generalissimo Franco but was appropriately renamed Plaza de la Paz (Peace Square).

A special bond between the locals of Lijar and the French Republic remains to this day as a result of this war. John Lennon probably would have agreed that, in this instance, giving war a chance can be a blueprint for peace.