THIS is the moment a driver reversed into another parked car sending it flying down a flight of steps.

The CCTV footage shows a woman get into the black 4×4 before a car behind it backs up at full throttle.

An image of the crashed car was shared widely on social media, with alleged witnesses claiming it belonged to a Russian fan who had crashed after his team lost to Uruguay.

The event happened in Diana Park, between Estepona and San Pedro. 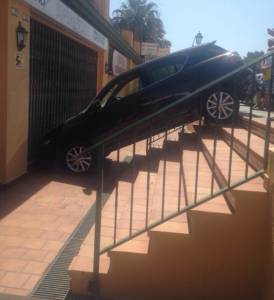 CORRECTION: A previous version of this article stated a football fan may have crashed his car and abandoned it