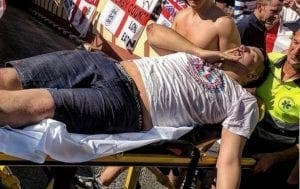 A BRITISH man was hospitalised in Sevilla yesterday after downing a bottle of Sambuca ahead of England’s clash with Spain.

The Three Lions fan was taken away on a stretcher a day before the kick off after consuming the large amount of alcohol during pre-game festivities.

Footage shows the supporter being taken away in an ambulance.

He is believed to have been discharged last night, according to a friend. 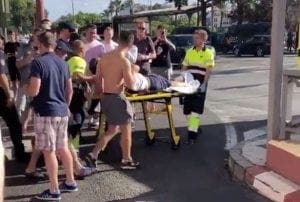 England will face Spain in Sevilla at 8.45pm tonight.

Pal Chris Gray was a bit miffed having to cut the party short.

He tweeted:  “So annoying, have to deal with it, (he’s) just sleeping at the moment. May be able to leave soon if allowed. Just annoying.”