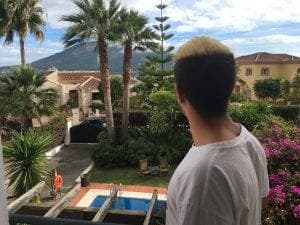 I SPEND 15 minutes gawping at the rugged Alhaurin el Grande mountain range from our balcony before I realise I am late for breakfast.

We’re running on empty but the cloud-covered peak of the Sierra de Mijas looming beyond the palm trees outside the window is more than enough to distract me from hunger pangs.

It feels like we’re in the wilds but this is Las Delicias, an urbanisation in Coín 33 km west of Malaga, 30 km north of Marbella.

After pulling my travelling partner Juan Fresquet from his comfortable bed, we amble downstairs where our host Hazel Rennalls has cooked up a mean breakfast.

‘Spanish toast’, complete with a piping cafetiere of the good stuff, lives up to the Las Delicias name.

We aren’t the only guests at the Palms and Lights B&B which Hazel runs with her husband Tony, having made the leap to Spain from Wokingham 18 months ago. There are Americans staying. The Guadalhorce Valley has international appeal.

Over a second cuppa, Hazel and fellow British expat Ursula Lewis endorse that, regaling me with tales of their adventures through the valley during their 25-year friendship. 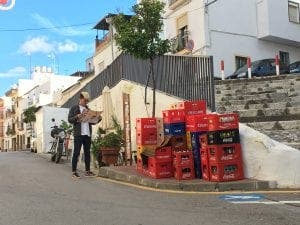 “Sundays in Coin are unforgettable,” says Ursula, who has travelled over 600 km from her home in Valencia for another glimpse of the valley – a reminder of the green, green grass of her ex-home.

“Every Sunday there is a flea market in La Trocha,” Hazel continues, referencing the swish commercial centre that has enticed the likes of El Corte Ingles and Dunnes Stores to branch out into the rural hinterland to cater for the growing expat population.

“The market is brilliant,” Ursula cuts in. “And very cheap. You can get anything from a pipe for your toilet to a lovely wardrobe.” 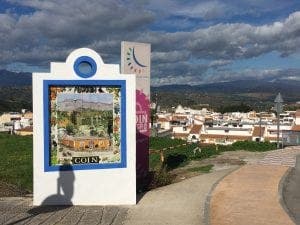 Just as you can get pretty much anything in Coín, the valley’s cultural centre, a mix of old and new, traditional and expat.

The feel of authentic rural Spain with a European veneer explains why so many expats from the UK and further afield, have chosen to call it home.

Even one of the tapa we enjoyed at the Nueva Alameda cafeteria was a fried bacon, eggs and mushrooms dish. Does it get more British?

Only the name Coin, perhaps, when spoken of by newbie Brits. It’s pronounced ‘Co-een’ but they call it like the money.

Historically, Coin is very much on the money with a cosmopolitan past stretching from the Roman Empire to pop culture. Eldorado, the BBC’s famously flopped soap, was filmed on a purpose-built set outside town.

The Romans set the place up as the market town of Lacibis, mining the terrain for minerals and laying the foundations for the area’s latterly burgeoning ‘Green Coin’ ceramics trade.

Marble from the quarries of Sierra Blanca, five kilometres south, was used to construct the amazing Roman town of Italica, near Sevilla, the birthplace of the mighty Emperor Hadrian in 76AD. 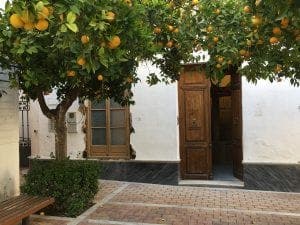 Then, like many parts of Spain, Coin fell to the Moors in the 900s before being reconquered by the Christians in the late 15th century. The town buckled under a siege in which, legend has it, the great New World explorer Christopher Columbus took part.

The fascinating 9th century Mozarabe Monastery will take you back to those swashbuckling times.

But the draw of the mountains is too strong and we set off to explore them.

We want to see the Sierra de las Nieves, Spain’s newly-declared national park to the west of the Guadalhorce Valley.

Largely untouched by tourists yet ridiculously close to the coast, it’s a weekend getaway begging to be booked. Pinsapo fir trees, Spanish ibex and thriving otter populations are some of the gems that won it National Park protection.

Tolox is the back door to this incredible mountain wilderness.

As someone once described it, ‘If Coin sits at the foot of the Sierra de las Nieves, then Tolox is the toenail’.

Once part of the Kingdom of Soleimán, this whitewashed Moorish village also draws visitors to explore the healing properties of its Fuente Amarga Spa.

Stress and muscle fatigue are washed away with a variety of therapies ranging from natural gas inhalation to mud spray treatments. Former Spanish Prime Minister Miguel Primo de Rivera is among the more famous faces to have indulged.

Conveniently close to the spa on the fringes of the Sierra de las Nieves sits one of the Guadalhorce Valley’s finest hotels.

Offering eagle-eye views as far as Malaga, the Cerro de Hijar hotel is one of Andalucia’s more remote places to rest your head.

If rigorous adventure is more your backpack, you should try the winding walk from Marbella, which takes in the towns of Ojen, Monda, Guaro, Coin and – if you have the energy – eventually Alhaurin. 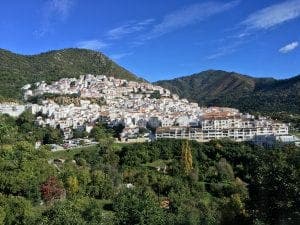 Take water for the steep climb and a camera for the awesome scenery and views.

Every hairpin bend round the steep cliffs offers up a fresh angle on the Guadalhorce Valley.

Looking up at the imposing ceiling of white cloud, and down to waterfalls trickling below, it’s easy to forget that the Costa del Sol metropolis is just over the mountain.

Arriving in Alhaurin is like deja vu as a ‘castle’ looms into view. It’s the famous brick water tower that starred in the opening credits of the Eldorado series, built to look old.

More striking is how Alhaurin has grown. Where Coin may have one amazing tapas place or cake shop, Alhaurin has several.

The route south west out of Alhaurin brings you to the serene Barranco Blanco (White Ravine).

A photographer’s favourite, buried in the countryside where wild boar feel safe to roam, its aquamarine waters end in a magical waterfall.

Everyone mentions the Nazis, who allegedly used the area as training camp during WW2, due to the alliance between Franco and Hitler. You can still see a white building that was used as a sentry point as you arrive.

And let’s not forget the Caminito del Rey, a huge hit with thrill seekers.

Once dubbed ‘the world’s deadliest walkway, and with 1,000 visitors a day, this high-adrenalin hike above the El Chorro gorge, is in high demand.

It was recently praised as a ‘shining example’ of a sustainable tourist attraction. 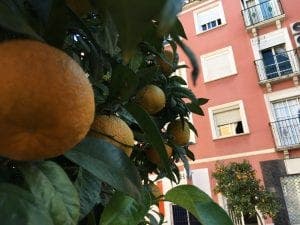 Director of tourism for the Costa, Arturo Bernal, said thousands have visited the site this year, while ‘last winter saw visitors of 84 different nationalities flock from five different continents’.

Emerging at the other end of the Caminito in Ardales, you’ll be hard-pressed to get in your car and leave.

The scenery is more akin to the cantons of Switzerland than anything found on the Costa del Sol.

So many white villages, so much still to discover about the Guadalhorce Valley. In the towns our catchphrase of the day became ‘We’re not lost’ when people saw us consulting our tourist office maps and offered help.

But really that is the only way to experience the Guadalhorce Valley. Just lose yourself.