RESIDENTS of a town in Andalucia have set alight and shot an effigy of Carles Puigdemont, the ex-president of the Catalonia region in Spain.

Townspeople in Coripe, Seville attacked the model of Puigdemont which was dressed in the Catalan flag and adorned with a yellow ribbon – a pro-independence symbol.

The traditional ‘Burning of Judas’ ritual has been celebrated in the area for 100 years, but videos of the incident caused controversy on social media.

“Today in a town in Spain, governed by the PSOE, they decided to shoot and burn a doll that looked like me, and that wore a visible yellow ribbon.

“They did not want to shoot and burn me, they wanted to mock the struggle for freedom of prisoners and exiles,” said Puigdemont.

The mayor of Coripe, Antonio Perez, dismissed the controversy as ‘satire’ and has justified the decision to make a Judas doll resembling the former Catalan president.

Perez said the tradition of the festival was to create a figure ‘that represents evil and the thing that is killed is evil.’ 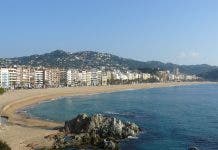