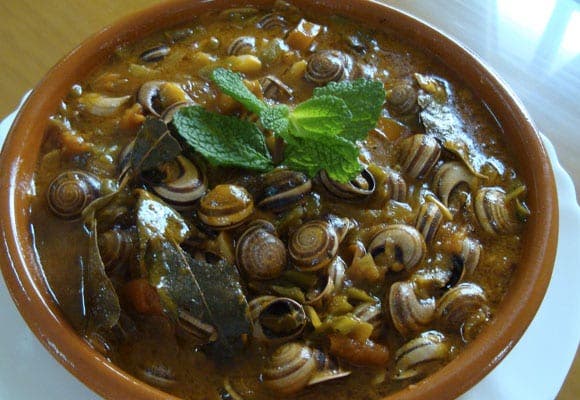 IF you thought snails were only a French thing, think again.

Caracoles are a huge tradition in Spain, and Snail Season – mid-April to late June – is upon us.

Spain consumes around 16 million kilos of snails each year, which makes it the second largest consumer in the world after France.

The gastropods are so popular in Spain that the country hosts the largest snail festival in the world in Lleida, Catalonia. Every spring, around 12 tonnes of the slimey shell-dwellers are consumed in three days in the Catalan town. This year, the festival will be held from 31 May to 2 June.

And according to Josep Marcelo, president of the ANCEC (National Association for Cultivating and Rearing Snails), their offspring is also a delicacy.

“People are rediscovering snails and especially their eggs,” he says.

Spaniards’ love of snails goes way back. A 2014 study found that Palaeolithic humans in Spain started eating them 10,000 years before their Mediterranean neighbours.

Much later, snails became a delicacy for wealthy Romans who bred them in protected spaces called cochlearia.

In his Naturalis Historia, Pliny the Elder tells us that a certain Fluvius Hirpinus started that trend, in between the reigns of Julius Caesar and Pompey.

Nowadays, Spain imports most of its snails from Morocco, Mauritania and Eastern European countries.

However, according to data from the Spanish Ministry of Agriculture, snail breeding is expanding in the country, with the number of snail farms rising from 26 in 2000 to 614 in 2018. Traditionally sold at a cheap price by street vendors, you can now buy them by the kilo in markets, street stalls and even supermarkets throughout Andalucia.

The average price for a kilo of snails is €7.50. Bars serve them as tapas, typically with tomato and garlic sauce.

Snails are also the main component of numerous dishes such as rice and rabbit.

Snails are also good for your health, as researchers from the Hospital Universitario Reina Sofía have recently highlighted. They are low in calories (about 90 kcal for 100 gms) and  are a source of protein, iron, Vitamin B12, magnesium, selenium and omega-3.

Additionally, snail slime is used in cosmetics for its supposed anti-inflammatory, anti-ageing and moisturising agents.

Caracoles are easy to prepare at home, so give it a go!

Place the snails in a pot of water until it boils. Wash them several times until they are completely clean and then leave them boiling in a season of aromatic herbs and salt till well cooked. Fry in a pan the onion, tomato and the sausages. Add the white wine and the brandy;  salt, garlic and parsley; pepper and aromatic herbs. Add the boiled snails and cook it all till it is ready (1/2 hour approx.).