THE Spanish energy company behind plans to construct a line of giant pylons across the stunning Granada countryside has been probed by the European Commission.

It comes as anti-pylon campaigners wrote to the Minister of Ecological Transition and Spain’s European Commissioner to demand an end to all electrification projects.

They insist the huge importation of dirty coal generated electricity since November 2018, is ‘outrageous’ and flies in the face of Spain’s renewable electricity intentions.

They add that the underwater lines between Spain and North Africa were put in exclusively for renewables, but the equivalent of 471,000 tonnes of carbon dioxide had been imported so far.

Part of the electricity comes from the huge Safi power plant, south of Casablanca, where 10,000 tonnes of coal is burnt daily, they claim.

“Just because the coal fired stations are outside the EU, it does not excuse Spain and the future electric highways, such as those in the Alpujarras and Lecrin Valley need to stop until this situation is addressed,” Tanya, a retired University lecturer from Orgiva, told the Olive Press.

It comes after this paper launched its ‘Fight the Power’ campaign to stop the Alpujarras project in February.

“An investigation is required to explore what these companies have been doing and if any further rules or agreements have been broken.”

In a letter obtained by the Olive Press, the EU Commissioner for climate action and energy, Miguel Arias Cañete said: “The European Commission was aware that Spain had recently begun to receive electricity from Morocco, which is a change from previous trends.

The European Union is firmly committed to the fight against climate change, as well as to the transition to clean energy.”

Cañete also confirmed talks at the ‘highest political level’ are planned for the ‘Two Shores’ energy summit in Marseille on June 24. 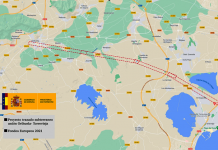 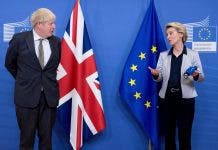