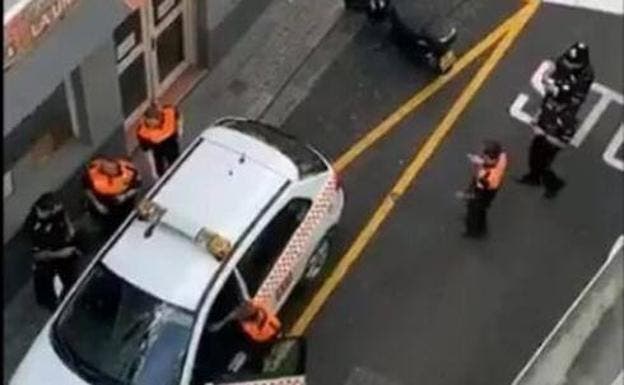 A SPANISH Proteccion Civil chief never imagined that nipping to Gibraltar to treat himself and his work mates to some chocolate would cause a diplomatic incident.

But when Jesus Manuel Narvaez, head of the El Burgo Proteccion Civil, drove three colleagues onto the British territory on Sunday, that’s just what happened.

After finishing their shift in Manilva, Narvaez asked permission from El Burgo mayor Jose Garcia to make the excursion to the Rock.

“I wanted, in some way, to motivate my colleagues,” he told press, “to thank them for their dedication.

“We didn’t know you couldn’t enter Gibraltar with an official vehicle.

“If they had told us it couldn’t be done, we would have turned around, parked in La Linea and changed our clothes and entered, but no one told us anything.”

The vehicle passed the border without being stopped by Policia Nacional or British police.

When it parked in Governor’s Street, people began to take pictures.

“A couple of police approached us and told us we couldn’t have an official car and took us to the police station,” added Narvaez, “they treated us well.”

They were questioned before being returned to the border.

The footage of the car on the Rock incensed Chief Minister Fabian Picardo.

“The incident today whereby Spanish ‘Proteccion Civil’ officers have not been stopped when driving across our border is more than just concerning,” the newly re-elected leader wrote in a statement.

“I am asking all relevant bodies to explain to me how on earth this has happened and to ensure it does not happen again.”

He added: “This is frankly not acceptable.

“Our systems have failed today and they must not fail again. Someone must take responsibility for this failure.”