MY A-level politics teacher would have scoffed at the idea of the ‘loony’ UKIP brigade – his words not mine – achieving anything close to their Brexit dream.

And back in 2008, Mr Watters had reason to think that way.

The party was well within the fringe of the political spectrum, not given much more credence than the Monster Raving Loony Party.

But fast forward eight years and a seismic shift in the political landscape – led by Nigel Farage – saw their ideas thrust into the mainstream.

As the Brexit referendum was announced (by he who shall not be named) and the polls tightened, suddenly the once ‘catastrophic nightmare’ Mr Watters could have only imagined, was now a reality.

By the skin of his tobacco-stained teeth, Farage achieved the unachievable, with Brits narrowly voting to leave the European Union.

Despite the slim majority (51.9% – 48.1%), and despite the fact that Scotland and Northern Ireland voted overwhelmingly to remain, AND the fact that Farage had previously stated a result so close in a Remain victory would demand a re-vote, ‘the British people had spoken’.

Lest we forget the illegal spending of the Leave campaign, which, if had been found on the Remain side and in a Remain victory, I can guarantee would see the right never rest until we had a referendum 2.0.

Following on the back of an at times hate-filled campaign, the next few years would unleash a surge in racism and hate crime incidents as those on the far right felt more emboldened than ever.

I’ll admit it, it is fair to say, Farage has had an incomparable impact on British politics – but not one deserving of a knighthood.

His anti-EU, anti-immigrant rhetoric has only served to divide the British public while his dream of pulling the UK out of the world’s second-largest trading bloc has plunged the country into bleak economic uncertainty.

The UK will achieve its worst growth (1%), since the end of the Second World War this year.

Brexiteers will tell you there will be an adjustment period, but having to redraw treaties with our 27 closest trading partners while grovelling to the US, offering not much more than chlorinated chicken and the selling off of our NHS, it’s hard – no impossible – to think of ANYTHING positive Brexit has brought us.

And now (after coincidentally clearing the way for Boris Johnson by standing down his Brexit party candidates in this month’s general election) rumours suggest he may receive the highest honour in the land.

It’s a kick in the teeth to not only the Remainers (who polls suggest are now in the majority), but the minority groups who have lived in an increasingly hostile environment as a direct result of his actions. 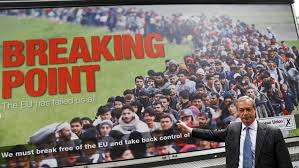 What kind of a message would it send, to reward a man who once said he would be ‘concerned’ if a Romanian family moved in next door?

A man who blamed immigrants for being late to an event in Port Talbot in December 2014?

“It took me six hours and 15 minutes to get here – it should have taken three-and-a-half to four,” he said at the meet-the-leader style event, “That has nothing to do with professionalism, what it does have to do with is a country in which the population is going through the roof chiefly because of open-door immigration.”

In October 2014, he said people with HIV should be banned from Britain.

When asked by Newsweek Europe who should be allowed into the country, he said: “People who do not have HIV, to be frank. And people with a skill.”

It’s a shockingly dangerous remark which only serves to stigmatise HIV positive people, many of them from the LGBT community – despite modern medicine making the infection impossible to pass on.

He would repeat similar views in the 2015 election campaign.

These are just two examples of dozens.

He’s defended the use of the word ‘ch***y’ to refer to Chinese people, declared parts of the UK as a ‘foreign land’ – saying he felt uncomfortable when hearing foreign languages on a train, and said women are ‘worth less’ to their employers than men, denying the existence of a gender pay gap.

And this was all before the Brexit referendum campaign, which saw some of the most flagrant racist rhetoric in modern history – not to mention the outright falsehoods.

Lest we forget the sickening ‘breaking point’ poster, showing Syrian refugees travelling to Europe – fleeing their country (which the west were bombing, by the way).

It was compared to Nazi-style propaganda and was revealed on the same morning as Jo Cox’s murder by a far right lunatic.

Then there’s the notorious pro-Brexit bus pledging 350 million quid a week for the NHS, which Farage later admitted was a ‘mistake’.

To think that a man who has divided the country, dragged Britain into economic uncertainty and campaigned on racist and xenophobic rhetoric could now receive a knighthood is nothing less than a disgrace.

Dilip Kuner - 26 Oct, 2021 @ 17:15
THE grim task of exhuming, identifying and reburying dozens of victims of the Spanish Civil War has started after two mass graves were found. Archaeologists...

Which Laws Should Spanish Citizens Need to Know in the USA?