MANCHESTER United have been training in Marbella ahead of their game against Chelsea this weekend.

The Red Devils enjoyed a winter break last week and have now moved to the Costa del Sol for their warm weather camp.

The temperature in southern Spain is above 20°C, in comparison to the weather in northern England which has been plagued by Storm Ciara.

Ole Gunnar Solskjaer’s side have checked in to the Marbella Football Centre based in San Pedro, looking to recharge their batteries.

One notable absentee however is Paul Pogba, who is currently in Dubai recovering from ankle surgery.

The centre is a frequent warm winter training base for many Premier League sides, including Wolves who arrived last week.

United are staying at the Kempinski hotel, well-known along the coast for its exclusive clientele including oil tycoons and film stars.

A worker at the five-star hotel told the Olive Press that fans have already started going to the establishment hoping to see their heroes.

“We get a lot of people trying to get in, but unfortunately we have to turn them away and tell them to wait outside if they want an autograph or a selfie with the players,” he said. 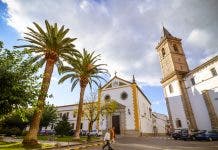