From June to August the top tier footie teams in Spain’s La Liga division release their kits in the build up for September kick off.

Real Madrid might have the most championships to their name but who will be best dressed when sprinting down field in 2020?

Alaves
Alaves have undergone a much needed modernisation in their look. After announcing a new clean cut logo in July, the kit is similarly simple. But its one baby step at a time for this team’s glow up: Blink and you’ll miss the updates.

Athletic Bilbao
Shading seems to be a favourite of Athletic Bilbao. With overall thinner stripes and faint sound wave-esque patterns peppering the red sections of the shirt, the player’s torsos will be looking contoured with this slimming design. But the detailing is so subtle it’s visible to only eagles above the pitch. Bold is better in a stadium of over 50,000 people.

Atletico Madrid
They’ve got the gear and the idea. Nike’s design for Atletico Madrid might be their best offering yet. Thinner stripes, two buttons and a navy side trim that matches the folded polo collar. It screams 1998 louder than mini skirt suits and micro bags. You truly love to see it.

FC Barcelona
Supposedly, this kit is inspired by the club’s golden era: the 1920s. But where is the lace up collar and the horizontal striped sleeve end detail? You never half arse vintage and Barcelona have frankly bottled it. This could have been a striking heritage design and instead it falls short. Still, thank god they ditched the Battenberg squares of 2019.

Celta de Vigo
If Cinderella played football this would be her shirt with its powder blue hue and silky texture. With a nod to the 80s, the thick white collar and navy shoulder piping add some much needed finesse to the fit.

Cadiz CF
Canary yellow is hard to style so you can’t take a swipe at Adidas for doing their best with what they had. Could blind spectators without protective eye wear.

SD Eibar
They say imitation is the sincerest form of flattery but this is simply the Barcelona kit in a different font without any of the neat yellow detailing. Poor form.

Elche CF
Like the person you fancy that shows up to the party late, Elche have created mystery and intrigue around their kit by simply not announcing one. Then, on Friday as La Liga kicked off, they released this block peppermint number. You get the feeling they’re just happy to have arrived.

Getafe
The neck of this is reminiscent of a half zip wetsuit: black, close fitting with a flash of decolletage. Vintage kits were definitely more exciting but Joma have always been somewhat risk averse. It’s the kind of thing you could wear in front of your nan without too many disparaging comments.

Granada CF
It’s just simply horrible. Dennis the Menace have given up his pranking days and pootled on down to the premiership. Stripes start thin but bulge lower down, blue is barely featured up top but left for an abrupt surprise below. Chaos on the eyes.

SD Huesca
You can only assume that a team who plonks a crucifix on their kit doesn’t have much faith in their players. Fingers crossed for divine intervention.

Levante UD
Dress for success as the adage goes and, like Eibar, Levante have imitated Barcelona. The ready salted offering of this line-up; there isn’t a glimmer of flavour or flair in their locker this year. A minimalist kit isn’t always a cop out but this one is.

CA Osasuna
The regal red, the embroidered gold detailing: this is the perfect kit to celebrate the centenary of Osasuna. Adidas have come through and gifted the club with an absolute flex of a kit without unnecessary bells or whistles.

Real Betis
Is that Nabil Fekir or a peppermint candy cane making its way towards midfield?

Real Sociedad
The two tone stripe here is a nice touch. It’s not going to knock Anna Wintour off her front row seat at fashion week but it also wont activate her gag reflex. A nice middle of the line offering. Horrid contrasting socks.

Real Valladolid
They’ve chucked a bottle of Ribena over their white PE kit and called it a day. Chin up Valladolid.

Sevilla FC
Quite a celestial outfit choice from Sevilla. While grass stains will wreak havoc with the 50 shades of white it’s a relief to see a diagonal variation on La Liga stripes.

Valencia CF
It’s a white t-shirt in some liquorice casing. You can’t really go wrong with two tone dressing but it is largely forgettable.

Villareal
Fire whoever did this and put them on bed rest. 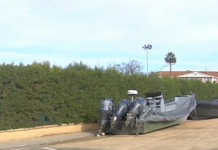 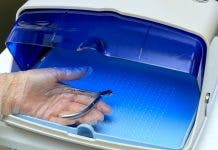 Kirsty Mckenzie - 28 Oct, 2020 @ 16:15
PUPILS and their parents were left stunned this week at the sight of drug boats parked outside a school in Seville.