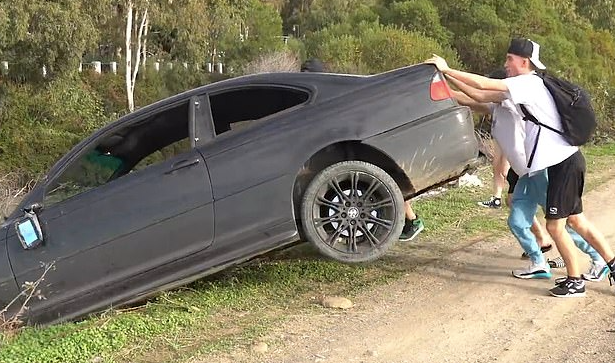 A BRITISH prankster arrested in Spain for dangerous driving has been identified at the Youtuber Ryan Taylor.

The 27-year-old influencer, who has over 2m subscribers on the video site, posted a video that showed him dumping a BTW into a river with the help of reckless pals on the Costa del Sol.

Marbella cops swooped in to arrest the clown after viewing the footage and charged him with crimes against road safety, against the environment and document forgery after posting the incriminating videos on social media.

The video named Driving to Spain with a $500 BMW has now been viewed over 135k times, despite a judge has ordered that of all the recordings be deleted from social media.

Taylor took to Twitter following his release and wrote: “Couldn’t risk going to Spanish jail for 2 years. Over a f***ing YouTube video.”

He also tweeted footage of the failed prank along with the face palm emoji.

The social media star, who has over 42.5 followers on Twitter,  is known for his dangerous driving, videos of which he frequently shares on his pages.

Police confirmed they found two cars with the same license plates, which showed the Taylor removing and using the same licence plate on several different vehicles.

When they tracked him down and cuffed him in Marbella, they seized two cars carrying the same plate.

He was arrested by local Marbella police officers on November 23 and a further six people have been charged by police in relation to the incident.