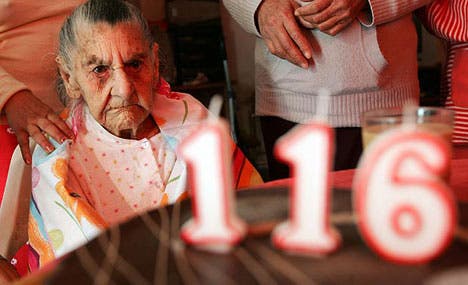 Despite living in a shack with no central heating, gypsy woman reaches record age

WHO needs central heating? Spain’s oldest person Maria Diaz Cortes has lived without it all her life. And she has just celebrated her 116th birthday.

Living in a shanty town on the outskirts of Sevilla, Maria refuses to move to an elderly people’s home with all the mod cons.

Instead, she prefers to live in a shack in El Vacie in the north of the city.

“It is out of the question to move her,” her youngest daughter Dolores, 72, said. “She would rather live under a bridge than in a home. Gypsies do not have the culture of putting their relatives in homes and we do not need central heating.”

The grandmother of “30 or more,” who was born in the Granada barrio of Sacromonte on January 4, 1892, is thought to be the oldest person in Spain, if not Europe.

Meanwhile, a new report shows the average life expectancy in Spain has risen.