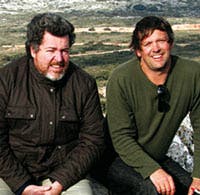 HE is lost for words when asked why Spain does not value its environment.

After a pregnant pause, Greenpeace president Juan Lopez de Uralde begins: “I call it the poverty complex, a complex particularly involving politicians. The idea that Spain is poor and as long as there is money we must develop every available space.”

It is a complex he is convinced is destroying this wonderful country.

“Little by little we are selling off our best public land to private developers. But, the facts are that we do not need to develop our last green spaces. We are not desperate for money. Take any indicator you like; kilometres of motorway per head of population, televisions, carbon dioxide emissions.

“We are on a level with most of the developed nations of Europe.”

His is a difficult job. Representing 100,000 members of an organisation in a country that ranks ecologists alongside communists.

Part of the pressure group that counts three million members worldwide, he is constantly running up against people who claim Greenpeace is anti-progress.

“Even the other day in Ronda, journalists were asking me if I wasn’t blocking development for the region.

“People accuse us of sending people back to the caves. But it is simply not true. We just want to try and save what little unspoilt beauty is left.”

Juan Lopez de Uralde is talking exclusively to the Olive Press on a fact finding mission to understand how the inland areas of Spain are now being carved up like the coast.

After lunch in a venta surrounded by workers and security guards from Spain’s most controversial golf course, Los Merinos, he is keen to start investigating.

Born in Bilbao and fluent in a number of languages, this mountain of a man strides off purposefully towards a peak overlooking the huge development.

Intelligent and erudite, his journey to Ronda is out of a necessity to see the facts “on the ground.”

“It is essential to get out of the office. This is a fascinating case and a classic example of how the horrific Costa del Sol development model has started to come inland.

“That this development is going ahead in a Unesco Biosphere reserve without the correct permissions is shocking. It has to be stopped.”

He cites how an incredible three million new houses were given planning permission along the coast in Spain last year.

Since 2000, there has been a rise in new construction despite a slow down in tourist numbers and demand for houses.

“With many places on the coast completely saturated, developers have had to turn inland,” explains Lopez de Uralde.

“Golf courses are thought to be the big draw, especially for the British buyers. In truth, they are just excuses for houses.” 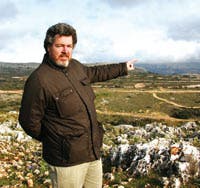 Ronda, as is the case in Antequera, Arcos de la Frontera and parts of Granada, is trying to make itself as accessible as possible to the new developers.

“The idea that the perfect big home is alongside a golf course 15 to 20 minutes from the coast will be perfect once the new motorway from San Pedro to Ronda has opened,” he says.

The main danger with this is water and its availability. “Golf courses use a lot of water at a time when rainfall levels are dropping throughout Spain.

“On top of that, there is also the issue of sewerage, roads and infrastructure in general. Town halls don’t realise how much it costs to put it all in.”

But there might be hope, in part thanks to the growing and vocal band of expatriates, who now inhabit the Iberian Peninsula.

“They are a big pool of people who are not prepared to put up with this huge over development.

“I find it amazing how many small pressure groups are springing up around the country. Germans, English, they are not prepared to put up with the corruption and double dealing that goes on.”

The main problem facing us all is the devolution of power that has allowed the economy to be dictated by the construction sector.

“There are laws to protect the environment, but they are often flaunted in the provinces, where local governments have much independence,” he explains.

The El Algorrobico hotel in Almeria is an excellent example.

“The Junta de Andalucia is playing a dodgy game and it is certainly not over yet.”

The problem goes back to the 1980s when the land was made available for development by the local town hall in Carboneras.

“Ultimately, we should be extremely careful when we make an area available for development, as it is then very difficult to reverse the change.”

Greenpeace is now demanding land made available for development is now put back to rural and protected.

It is also demanding towns should be prohibited from growing more than 10 per cent in their PGOU development plans.

As for the forthcoming Spanish election, he is clear and to the point. “We have to choose between bad and disastrous.”

We know what he means. Better the enemy you know.