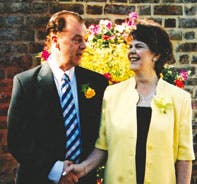 Private healthcare company Sanitas sends patient to the ‘wrong’ hospital to die, and then refuses to pay the bill

WHEN David and Carol Shields moved to southern Spain they were one of many couples who took up private health insurance from Sanitas.

Seduced by the firm’s slick advertising they agreed to part with 1200 euros a year for the so-called ‘Classic package’.

Taking early retirement three years ago they felt secure that in the event of something happening, they would be covered by the plan.

How wrong could they be?

During the last week of January, David, 55, started to feel increasingly unwell and was finding it difficult to breathe.

He had been feeling wheezy for a few months, but had put it down to the dust.

Using his health insurance for the first time the former building surveyor went to the Sanitas-recommended Clinica 24-horas, in Antequera.

Told there was nothing wrong with him and it was “probably a bit of mucus in the lungs” he was sent home.

But a week later on January 31 he was feeling worse and returned to the same clinic, where after a series of X-rays he was told to go urgently to Antequera General Hospital.

The order was reiterated with a letter to be shown on arrival.

Signing in with his Sanitas card, he was rushed to an emergency bed, where the next day he was diagnosed with cancer of the lung, pancreas, liver and brain and given only weeks to live.

The only comfort to Carol, 53, as her husband passed away ten days later on February 10 was that their private healthcare scheme would at least pick up the bill.

So it came as something of a shock, when just days after his funeral Carol received a letter from the hospital requesting a copy of David’s social security or health insurance card.

The letter went on to say that in the event of not receiving the due information, a bill would be sent to her for treatment.

To her surprise, when Carol phoned Sanitas she was told that because Antequera hospital is not on her policy’s list of recognised hospitals the company would be unable to pay it.

“They were adamant they were not going to pay even though David was referred to Antequera by Sanitas’s very own clinic,” she told the Olive Press.

“We were apparently expected to take an 80 euro taxi ride or a three-bus trip to Malaga for treatment,” she continued.

“Apparently if we had paid for the Comprehensive package then we would have been fine.”

When she asked to speak to the manager to complain she was given a fax number to send a complaint. A gestor employed to sort out the mess was told by the hospital that if the bill was not paid, an embargo could be placed on Carol’s property or bank account.

“That’s the last thing I need,” said Carol, who comes from Fife in Scotland. “Why did the clinic send us to Antequera hospital if we were not covered? All we did was follow instructions.

“Surely it is up to Sanitas to inform the 24-clinic of the hospitals they can use.”

The former civil servant is so upset with the company that she has now cancelled her policy only to be told there will be no refund, as there was only two months left and she needed to give two months notice.

After months of correspondence she has now been told that if she pays the bill once it arrives, Sanitas will refund her.

“But I am not going to pay a bill until I get something in writing that confirms this,” she insisted. “They are probably just trying to fob me off.”

It appears that had she informed Sanitas within three days of her husband’s arrival at Antequera all might have been fine.

The company would then have decide whether to leave him there and pay the bill or move you to another hospital covered by the policy.

“But that raises the issue of your family then having to take buses and trains miles to visit you,” said Carol.

“Private healthcare here is a real racket and people who live in inland Andalucia should be very careful of what they are paying for and which hospitals are on and off their lists.

“Ultimately by taking early retirement we were forced to get private healthcare, which has ended up costing thousands of euros, but when we needed it it was a waste of time. Four months later I still have not received the bill. The stress is killing me too.”

A healthcare advisor said: “It pays to always shop around for health insurance and double check the small print and how exactly you are covered.

“Private healthcare costs a lot of money and you don’t always get what you want.”

A spokesman for Sanitas refused to comment on whether the bill would be picked up by the company. “We have asked for a complaint to be sent in writing and only then can we attend this issue.

“We have a lot of channels to resolve the problem and we hope to be able to sort it out soon.”