Detectives have been probing why they apparently fell into the 100-metre deep chasm, just one week apart.

The first, a local woman in her early 30s, fell to her death semi-naked from the kitchen of her house, which overlooks the gorge.

The second, a man, also in his 30s, apparently jumped from the famous bridge, after leaving his motorbike beside the Parador hotel.

But incredibly, after the biggest recovery operations ever launched in the region – involving 74 officials and two helicopters – his body has still not been found.

In a story, that has kept the mountain town gossiping for a fortnight, the first victim, a waitress, had only recently moved into the house her boyfriend owned in Calle de Villanueva.

According to sources, the girl had been out all day with friends and fell early the next morning.

Detectives have been undertaking a painstaking door-to-door investigation to ascertain what exactly happened.

A National Police spokesman confirmed: “We are investigating the death and looking at all possible circumstances. We have not yet discounted suicide.”

While officially they refused to confirm any more details, sources told the Olive Press that the death is being treated as “suspicious”.

“Police find it odd that a girl would jump to her death semi-naked,” said Gunter Spear, a local German resident who has been helping in the inquiry. “Women almost never commit suicide in this way. It is normally with pills.”

A fireman, who helped to recover her body, added: “It is strange indeed and all we know is that enquiries are continuing.

Friends of the dead girl told the Olive Press that she had recently decided to leave her job at a cafe in Calle La Bola after eight years.

“She wanted to change her life and do something different,” said the friend. “She had just moved in with her boyfriend and wanted to have children.

“The relationship seemed pretty healthy, so this is strange. Maybe two changes in two weeks may have been too much for her and she had been a little down recently.”

The friend added that the girl had previously been in an “abusive and turbulent” relationship.

The second death is more likely to be suicide. The man, who had allegedly driven on his motorbike from the village of Algodonales, in Cadiz, had according to sources twice tried to commit suicide before.

According to a fire brigade source a detailed search of the Tajo found his wallet and a pair of shoes.

While it is unknown exactly why the man took his life, one source said that he was suffering from some sort of disability.

A team of rescuers (see below) spent the weekend and earlier this week dredging the bottom of the Tajo to find his body. 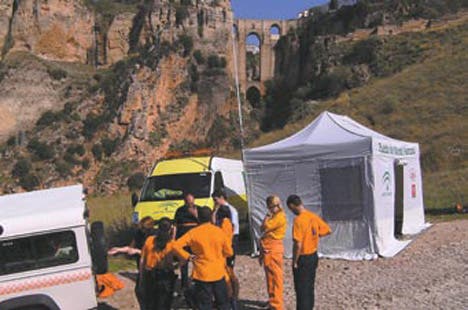 One of biggest ever recovery ops

IT WAS one of the biggest operations of its kind ever witnessed in Malaga province and comprised firemen, police and volunteers from the local Protection Civil.

Based out of a makeshift control centre at the bottom of Ronda’s Tajo gorge, the 74 members of the GREA (Emergency Group of Andalucia) were assigned one objective, and one objective only: find the body of a man who had apparently jumped to his death the previous week.

It had certainly become something of a mystery: How had the corpse of the man from Algodonales simply disappeared since allegedly throwing himself into the Tajo last Monday?

A team of four firemen had unsuccessfully spent all week scouring the Guadalevin River at the bottom of the gorge, which sees an average of five suicides a year.

Abseiling down from the famous Puente Nuevo, they had risked treacherous conditions. Despite the heavy rain, recovery teams normally find a body in a day or two. But, by Thursday a helicopter was drafted in from Sevilla at 3000 euros an hour to help.

By the end of Friday the search teams were still being frustrated by the weather and terrain.

“With the heavy rains not only was the river very murky but it was full of rubbish,” Malaga fire chief Alejandro Hurtado told the Olive Press. “It is eight metres deep in places and full of old tractor tyres and all sorts of other junk.”

On Friday night the decision was made to call into force a full recovery operation and a total of 42 people were drafted in to help on Saturday.

The Olive Press watched the 100,000 euro-plus drama as rescue crews abseiled down the gorge and crossed the raging river.

By Sunday, with another helicopter circling above, no less than 74 men were scouring the area all the way to where the river meets the River Guadalcobacin, at La Indiana.

“It is the biggest ever operation of its kind,” explained Hurtado. “But despite scouring the canyon five times we have not found the body.”

He continued: “It is very frustrating. After eight days his body should have been found. Certainly someone should have noticed the smell or seen vultures swooping overhead.”

The operation – which is estimated to have cost at least 100,000 euros – was continuing as the Olive Press went to press.