TWO of the world’s rarest animals have been found dead in Granada and Jaen. 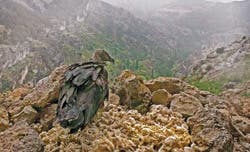 In separate incidents, autopsies revealed that both an Iberian lynx and a Bearded vulture died as a result of ingesting man-made poisons.

The death of the vulture, a species that has been extinct from Andalucía’s skies since 1980, is the second this year in Castril, Granada.

The eight-month female bird – which was released in the Sierra de Cazorla Natural Park in May 2008 after being bred in captivity in northern Spain (see the Olive Press, issue 47) – was found on the same farm land where another Bearded vulture was discovered shot dead in April.

And officers from the Guardia Civil believe the same man, known only by the initials JGG, is responsible for the two deaths.

The 67-year-old farmer, who is still under investigation for the first death, is believed to have laced three pieces of meat with venom to deter foxes from his land. Also discovered close to the body of the bird were the remains of a fox and a sheep.

“This shows the damage that can be done to an area’s ecosystem with the reckless use of poison,” said the mayor of Castril, José Juan López.

The Bearded vulture, Europe’s largest bird of a prey with a wing span of almost three metres, is also known as the lammergeier, a German word meaning lamb killer. Shepherds have reported in the past these vultures swooping down to carry off new-born sheep.

It was once dominant in mountain areas of Spain, but its numbers have been greatly reduced in the past 100 years due to hunting, poisoning and the proliferation of electric pylons, which have resulted in numbers of the species dying as a result of electrocution.

Due to a reintroduction programme, there are small colonies of the bird in Andalucía and northern Spain.

Meanwhile, green groups have slammed the deliberate killing of an Iberian lynx – the most endangered species of feline in the world.

The body of the five-year-old male was discovered close to a chicken coop on private farmland in Andujar, Jaen.

Tests showed the lynx, of which there are only an estimated 150 in the wild, had ingested rat poison.

The use of poisoned bait, a practice prohibited by Spanish law, has resulted in the deaths of 20,000 animals in Spain since 1995.

According to animal welfare group WWF, protected species such as Imperial eagles, Bearded vultures, Iberian lynx and Brown bears – have died as a result of eating poison.

Alex Trelinski - 30 Nov, 2022 @ 14:00
TWO children aged 15 and 17 have been charged with a series of violent robberies after threatening victims with a gun in Valencia. The thefts...